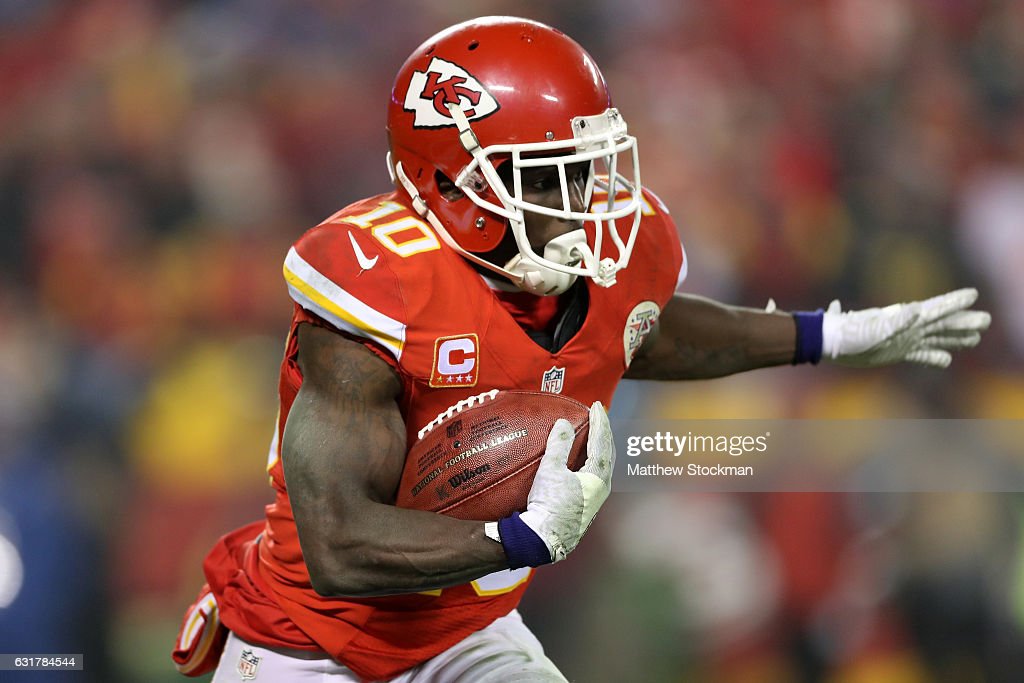 The Chiefs apparently tried to trade Jeremy Maclin before they released him yesterday in a surprise move. They did a pretty good job keeping it quiet, but it makes sense that no team bit since he was unwilling to take a pay cut; which means if a team did trade for him, they would be responsible for his $10M against the cap this season. This will eventually be a win for Maclin, as he will probably get a new deal and can shine in a new offense. Remember, he had a 85-catch, 1300 yard season in 2014. 15.5 yards per catch! Ridiculous. Keep an eye on where he lands, and watch his ADP rise depending on where he lands. If he can get a QB that can air it out, he can be a difference maker with the potential of being a low-end WR1, assuming he can stay healthy.

But what are the fantasy implications for the rest of the Chiefs offense? I think the offense definitely takes a hit, even though Maclin wasn’t always that productive. He’s very talented, and defenses knew to try to take him away; the opponent defense’s secondary can now focus elsewhere. However, the opportunity will go way up for the other receivers. Tyreek Hill is a clear beneficiary, and I would expect his draft stock to rise as we move closer to August drafts. Andy Reid knows how to use his playmakers and we saw what Hill did on limited opportunity last year, and when targeted heavily we saw that he will produce. In a game planned without Maclin (out with groin injury) last year in Week 9 at Carolina, Hill saw 13 targets of which he caught 10 for 89 yards, and 3 rushing attempts for 27 yards. In Week 11, he had 10 targets with 9 receptions for only 52 yards and a TD. Such a low yardage count just means that they were really trying to get him the ball. He also had a rushing TD in that game. However, in the other 2 games during that 4 game stretch without Maclin, Hill only received 5 and 6 targets respectively, averaging 60 yards. Not bad in a PPR, but we have to calm our expectations in this offense. You have to think Hill will take a step forward from his rookie season, not to mention the offense already planning to try to get the ball in their electric playmaker’s hands more often. This news makes that even more of a likely outcome. I can see Hill being an easy WR3, and potentially a low end WR2 with some week-winning numbers. This isn’t the most prolific passing offense in the league, so temper your expectations, but it is a good, controlled offense that can see a good amount of red zone opportunities. After Kelce’s lead of 16 red zone targets, Hill and Chris Conley came in second with 13 targets each.

Don’t forget about Travis Kelce. His 117 targets and 85 receptions can go up even higher this year without Maclin. Teams will try to take him away, but they’ve been trying to do that. Kelce is a beast, and look for Alex Smith to pepper him with even more targets. They haven’t been getting the touchdown production out of him that they would like, but that could change this year. He’s a matchup nightmare, and those 4 TDs on 16 red zone targets will likely go up.

The other receivers: Chris Conley, Albert Wilson, and De’Anthony Thomas. This is an extremely young receiver core, and I wouldn’t expect much out of any of them this year. If this was a prolific passing offense, we can expect one of these receivers to step up, but it isn’t. I wouldn’t expect any of these three to be fantasy relevant.

One thought on “Chiefs Fantasy Implications after cutting Jeremy Maclin”